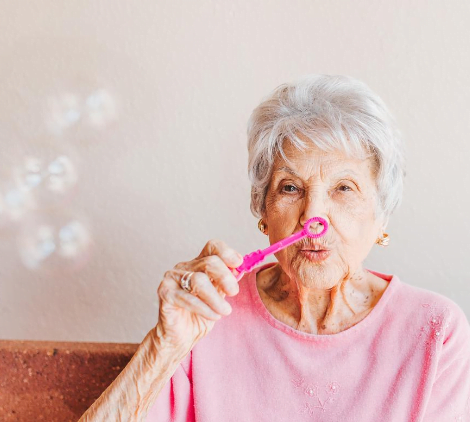 Dementia is not an inevitable part of aging. Learn how to help your senior stay mentally alert for a lifetime.

There’s no question that we’re living longer. The average life expectancy for an American today is a little more than 79 years, increased significantly from the late 1960s. But are we living better? According to the most recent statistics available, nearly 1 in 10 Americans over age 65 suffers from dementia—a loss of memory or other mental abilities that is profound enough to make daily life difficult.

But there’s good news as well:  Some simple preventive measures can minimize the chances of a person’s golden years becoming tarnished. To help the senior you love stay mentally sharp, give these easy tactics a try:

Eat Mindfully. Studies have shown that seniors who follow an eating plan called the MIND diet have a lower risk of Alzheimer’s disease and other forms of mental decline. [1] To reap its benefits, a person must eat at least three servings of whole grains daily, along with a leafy green vegetable and one other veggie, plus a glass of wine. Other foods encouraged are nuts (5 servings weekly), beans (at least 3 servings per week), poultry (twice weekly), and fish (once a week). When food is cooked in oil, it should be olive oil.

Limit Unhealthy Foods. The MIND diet also advocates limiting certain foods. They include sweets and pastries (no more than 5 times per week), meat (4 servings per week maximum), cheese and fried or fast food (less than once per week), and margarine or butter (maximum 1 tablespoon daily). Don’t think your senior can give up all this? Studies have shown that even people who follow the MIND diet just part-time can cut their risk of Alzheimer’s Disease by more than one-third. But the benefits of faithfully staying the course are fantastic: One study found that people who stick with the plan full-time are 7.5 years younger, cognitively, than those who stray from it the most, and reduce their risk of Alzheimer’s by about 53 percent.[2]

Socialize. “When a person stops leaving their home or going out, dementia seems to come on faster and harder,” says Jyl Batterman, a senior living consultant and dementia educator. Her advice: Find out what’s keeping your senior from getting out there and seeing friends, and make any necessary adjustments. “If the problem is arthritis, for instance, maybe get a scooter so there’s less walking,” Batterman explains. “Or if a senior isn’t comfortable driving to a friend’s anymore, you could drive him yourself, or arrange for a car service or aide. The more that seniors are able to interact with others, the better it is for keeping their mental sharpness,” she says.

Find a Hobby. Having a project gives older adults a sense of purpose—“They need a reason to get up in the morning,” notes Batterman. But learning a new skill as opposed to repeating an old activity is the best way to keep the brain sharp. A 2015 study took 200 seniors and divided them into groups: One stayed home and did quiet activities for 15 hours weekly; a second group did things like watch movies and reminisce about the past, while a third learned something new, such as quilting or digital photography. In the end, only the group that had been challenged to acquire a new skill showed significant gains in memory.

Take a Stand. There’s no reason an able-bodied senior has to spend all his/her time on the couch. “Simply getting up and walking around can have health benefits for the brain and the entire body,” says Carrie Schmitz, the ergonomic and human research manager for Ergotron, which makes ergonomic office furniture. Schmitz and her colleagues have spent a lot of time studying the positive effects that even modest amounts of movement can have on the body, and the findings have been eye-opening. One Swedish study of older adults, Schmitz shares, asked nothing more of its subjects than to stop sitting so much. After the study ended, the scientists compared the participants’ chromosomes with those of a group of more sedentary seniors. The results: The seniors who’d sat less showed had less-pronounced chromosomal aging markers. And there’s more: “The act of standing up also revs the metabolism and increases circulation,” Schmitz shares. “This is important because it helps the body’s cells, including brain cells, flush out toxins and stay healthy.” So encourage your senior to stand up every so often, or even take a walk with you. His body and brain will be the better for it.

Don’t Shrug it off. Last of all, says Batterman, don’t shrug off the onset of confusion and disorientation as a normal part of the aging process. “Sometimes there is an underlying condition besides dementia that is causing the symptoms,” she explains. Medical issues such as an undiagnosed urinary tract infection, an adverse reaction to a medication, or even an undetected vitamin deficiency can all cause a person to behave ways that suggest dementia. If your loved one is acting “off,” make sure he has a full physical examination to rule out—or in—any reversible causes.